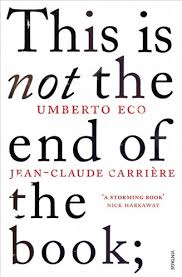 “The book is like the spoon: once invented, it cannot be bettered.”

Apparently some people have started to toy with the idea that current advances in technology – computers, the internet etc – pose a genuine threat to the future of the book as a means of conveying information.  This existential crisis of the humble book is in fact just one focus of Mr Eco and Mr Carrière’s transcribed conversation about the brave new world lying in wait for literature.  Whilst discussing the possibility of a dystopian future without hard-copy writing, they also take the opportunity to look back at the history of the book, in particular the history of its persecution at the hands of various bigots who have seen in its ability to impart knowledge a serious threat to their own power and legitimacy.  This leads nicely into an exchange about the internet’s ability to keep censorship at bay, a chapter entitled ‘The Internet, or the impossibility of damnatio memoriae’, in which Carrière states bluntly that “for dictators, the future is bleak.  If they are to succeed, they will have to operate in total darkness.”  Eco agrees and points out that the continued publication and distribution Rushdie’s Satanic Verses owes itself at least in part to the irrepressible nature of the modern global communication network.

Clearly technology is not all bad then; Danny Boyle’s tribute to Tim Berners-Lee during the opening ceremony of the Olympics was a touching reminder of the ability of the internet to connect people across cultures and nationalities – something that undeniably fits with London’s sense of plurality and openness, qualities that seem to be in short supply in other places at the moment.

However, there is another side to the ubiquitous electronic platform that is more ambiguous – its use as a sort of proxy for memory.  In other words, as a replacement for any real connection with information: the internet is a great safety blanket for anyone doing research or called on to produce dates and statistics.  Eco and Carrière broach this subject in the chapter ‘Do we need to know the name of very soldier at the battle of Waterloo?’,  a chapter that looks at the problem of how to filter the infinity of information supplied by the world wide web.  Since we know we don’t have to remember much anymore, we don’t, leaving the internet to accumulate a universe of information for us instead. Clearly, as the conversationalists of the book point out, we don’t have to know the name of every soldier at the battle of Waterloo, but it is probably out there on the internet somewhere, and if it’s not it soon will be.  One problem with this is that it demands that we become increasingly selective in the way we deal with online sources – the supply of information is no longer the preserve of a select few publishers, so we have access to anything anyone wants to provide.  Even Wikipedia, the decider of innumerable mindless debates, is open-ended in the sense that the only people to distinguish between what is correct information and what is not are the users of the website themselves (ourselves).  If someone were to put up a fake list of all the soldiers at Waterloo, would anyone bother to challenge it?

Perhaps unsurprisingly, this meditation on the value of online information led us, as editors of Dontreadtoofast.com, to a bout of intense self-reflection.  How can readers trust the “information” provided on this website any more than they can any other?  The answer, of course, is that you can’t, but we would like to think that we might be able earn your trust.  And if virtual promises can mean anything, we promise that we have actually read all the books that are reviewed on the site.