Mikhail Bulgakov and The Master and Margarita 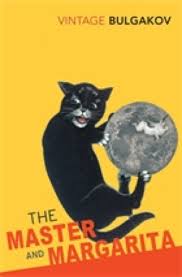 I first read The Master and Margarita in 1968, five years before it was published in its native Russia. I was dazzled and bewitched by its brilliance and originality, and I have been a life-long fan of Mikhail Bulgakov ever since.

Mikhail Bulgakov ranks with Sholokhov, Solzhenitsyn and Pasternak as one of the greatest Russian novelists of the twentieth century. The works of all four writers were forged in the heat of the revolution and the cataclysm which followed. Bulgakov’s interpretation of those events is perhaps the most extraordinary, zany and fascinating.

Mikhail Bulgakov (1891-1940) was born into a prosperous middle class family in Kiev. Although he tried to leave the Soviet Union many times, he was doomed to remain there throughout his life, so experiencing in full the turbulent transition from Tsarist Russia through the revolution and the civil war which followed to the communist dictatorship under Stalin.  Bulgakov’s greatest literary works, The White Guard, The Master and Margarita and Black Snow give the reader a remarkable insight into the human tensions created by that terrible period of Russian history.

Although Bulgakov originally trained to be a doctor, poor health, caused by wounds he sustained in the First World War, turned him from medicine to writing. His literary career swung violently from success to frustration largely as a result of censorship under Stalin. But his frustration is the reader’s delight. His caricatures of the bizarre people and situations he encountered are at once tragic and hilarious.

Bulgakov’s first great success came from his novel, The White Guard. This is a partly autobiographical exploration of the middle class Turbin family’s experiences in Kiev during the transition from German occupation to the incursion of the Bolsheviks. The characters are brilliantly drawn, with their strengths and weaknesses ruthlessly exposed by the fearful events they encounter.

Because of its highly political content, the novel was initially suppressed, but Stanislavsky, a Moscow impresario, had seen some of the early chapters and invited Bulgakov to turn the novel into a play. Under the title The Last Days of the Turbins, and after some judicious alterations, the play became a runaway success at the Moscow Art Theatre. Despite the play’s subversive content, Stalin was reported to have seen it fifteen times. Theatre goers were delighted by the play’s reflections of their own experiences during that turbulent period. Adverse comment about Bulgakov by Stalin in 1929 caused the play to be closed down, but astonishingly it was revived in 1932 when Stalin casually enquired why the play wasn’t running any more. It was then performed throughout the rest of the 1930s.

Despite the intermittent success of The White Guard, Bulgakov became increasingly frustrated by the vagaries of the Moscow theatre, censorship, interference by the authorities and the dictatorial behaviour of the impresario Stanislavsky. These frustrations led to the creation of two of Bulgakov’s greatest works, the novels Black Snow and The Master and Margarita. Both were unpublished in Bulgakov’s lifetime. Black Snow is the slighter of the two novels. It gives a highly comic reflection of the irritations and setbacks Bulgakov suffered in the Moscow theatre.

Bulgakov’s great masterpiece is undoubtedly The Master and Margarita. The novel was written over a period of ten years, and was only finished shortly before Bulgakov’s early death in 1940. It tells the story of the devil visiting contemporary Moscow. He is accompanied by two demons together with a naked girl and a huge black cat which talks, walks upright, smokes cigars and shoots a Mauser pistol. The devil causes anarchy as he plays his pranks on the unsuspecting citizenry. During these events only the Master and his mistress Margarita seem to survive undiminished. The Master has written a novel about Jesus and Pontius Pilate, and excerpts of this are interspersed through the Bulgakov novel. Underneath the black comedy and the strangely convincing account of the meeting between Jesus and Pilate there is Bulgakov’s bitter satire of the Moscow literary establishment and his exposure of the difficulties of life under the communist dictatorship.

For those who have never read any Bulgakov, I urge you to try him, and what better way to start than with The Master and Margarita? Alternatively see Simon McBurney and the Complicite theatre company’s fascinating multi-media conversion of the book into play at the Barbican. It ran to packed houses in March/April 2012 and it’s being repeated this December.

David’s first novel Blockade Runner is published by Pen and Sword. You can find a link to it here or ask in your local bookshop about  buying ordering a copy now.

Tags: Books, Bulgakov, Fiction, Review, Russia
From: Fiction, Home, Review
← Freedom’s just another word for nothing left to lose
The love of the library →
One Comment