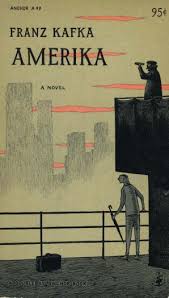 Amerika is Kafka’s first long story and in many ways it stands apart from its successors, The Trial and The Castle.  For starters, the protagonist has a recognisably full name – Karl Rossman – and he inhabits a world which, although endowed with a sense of surrealism, is less manifestly abstract than those of the other two texts.  In fact, it is almost as if Kafka used this first attempt at a long-form narrative as a springboard, both conceptually and stylistically, to his later, better-known books.  Most English-translation editions of Amerika keep the “k” in the title, partly, I would imagine, as a nod to Kafka’s predilection for the letter – in many ways the K. of the later stories is a symbolic adaptation of Karl; more cynical and therefore easier to use as an avatar for mankind generally.  Also, Kafka never actually visited America, which means that what we are confronted with is purely a figment of the writer’s imagination, a distillation of travel books, assumptions and general impressions.

The surrealism in Amerika owes itself less to the situations into which Karl is forced than the way in which the narrative progresses seamlessly from scene to scene, much like the various stages of a convoluted dream – each stage flows incongruously into the next, but the dreamer remains blissfully unaware of the absence of logic.  For example, the first chapter – “The Stoker” – culminates in a bizarre scene in which Karl protests against the injustices inflicted on a friend he has just met (the stoker) in front of a room full of people including the captain of the ship that has brought him to America and, as it turns out, his uncle Jakob, who is also a senator.  There is nothing particularly grotesque about this (noone turns into a giant beetle), but the situation escalates implausibly, as dreams often do.

Karl fits the role of dreamer perfectly: he is an adolescent optimist in the mould of Voltaire’s Candide, almost physically incapable of bearing grudges or becoming disheartened.  Nevertheless, although he comes across as an ambitious young man, he is not in America by choice, but rather as a tragic exile of circumstance, having been seduced (raped) by a servant who then becomes pregnant by him.  All the same, America is presented as the country of redemption and hope; the obvious place to go if one has exhausted domestic good will in the way that Karl has.  That being said, although the text sets itself up as a “foreigner-makes-good-in-the-USA” narrative, the rug is very quickly pulled from our feet – Karl suffers setback after setback, always retaining his good humour but never really making any progress towards the American dream of wealth and self-fulfilment.  This wrong-foots the reader (it wrong-footed me) and instead we are forced to get used to the possibility that Karl will never “make it” in the traditional sense.  And yet, this is an undeniably positive book.  Karl is never fazed by the surrounding chaos and seems to thrive on it, spiritually if not materially.  As such, when Karl joins a circus in the final chapter we are left with the sense that maybe he has made it after all.  It reminded me of this reference to the Circus-Circus casino in Hunter S. Thompson’s Fear and Loathing in Las Vegas (subtitle: “A Savage Journey to the Heart of the American Dream”):

“Nonsense,” I said. “We came out here to find the American Dream, and now that we’re right in the vortex you want to quit.” I grabbed his bicep and squeezed. “You must realize,” I said, “that we’ve found the main nerve.”