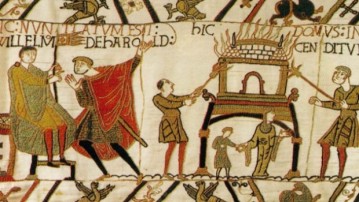 The first literary event I attended at this year’s Edinburgh Book Festival was a three-way talk given by actor Mark Rylance, writer Paul Kingsnorth, and ‘mythologist’ Martin Shaw, who gave a rolling rambling performance on England in the 11th century. Kingsnorth was promoting his book The Wake, which Rylance has apparently bought the film rights for. It is set in East Anglia in the 1060s and written in an approximation of Anglo Saxon.

Their shared session opened with Rylance ploughing straight into a reading from the novel, which is written in clearly understandable English prose (easier than Riddley Walker, reviewed here recently) but delivered with a mystifying Jamaican tilt by Rylance. A similar premise to Walker, the plot was described as “a post-apocalyptic novel set a thousand years in the past.”

Kingsnorth provided some historical context, perhaps to refresh the memories of those people (like myself) who felt slightly rusty on this passage in our nation’s history, but also to animate the stage for the kind of myths he is looking to revive. He opened with England’s foundation myth of the 5th century: after the collapse of the Roman Empire, warring tribes and king Vortiger were under Pictish threat from the North. Vortiger hired German mercenaries – the Angles and the Saxons – who did not know the Romans had once been in residence (this seems hard to believe) and told stories that giants had built the aqueducts.

Once the Germans had overcome the Picts, a giant leap forward to the eleventh century saw England as a rising medieval power on the island of Albion with a centralized monarchy and language. When it came to discussing 1066, Kingsnorth was keen on not rushing straight ahead to the Plantagenets, as History has been taught on the curriculum for a long time, but stopped at this point and asked why it took several hundred years after 1066 before English became the first language of the King, and why the first law of the land, created in 1067, was that all land is first in the possession of the crown. In other words, all land was automatically owned by the King, which is technically still the position in law today. There was also something called a ‘murdrum’ fine, which provided the root of murder as we know it, which you had to pay if you took a Norman’s life.

The effect these two factors had on the English people yielded more interesting results than posing the usual Battle of Hastings questions suggests: the decade after 1066 saw resistance to the new rule across the country. There were pockets of it, of little prominence, as resistance often manifests itself. The Battle of York saw all local rebel factions flee upon William’s approach. He then scorched hundreds of square miles of the surrounding land and killed all the livestock in what became known as the Harrying of the North, which resulted in widespread famine. This was dutifully recorded in the Domesday Book and is still referred to today. It was of course a decision William took in order to ensure rebellion would not be repeated, as well as to flush any remaining rebels out of hiding. He was quoted as saying on his deathbed to (the hardly impartial) Audric: “I fell on the English as a ravening lion…in this way I took revenge…and so became a barbarous murderer…and so dare not leave the crown to anyone but God.”

The main question that actually preoccupied Kingsnorth was clearly what life in England during this period was like, from the point of view of the Lincolnshire Fens farmer of his novel, who is in constant dialogue with the pre-Christian Teutonic gods. In this way the intersection between myth and history remains as knotted and integral as it always was. Picking at this knot with the old stories as a tool is something Kingsnorth is attempting for a part of the country we don’t hear enough about.

The Fens then were very different for one thing, being undrained, wild salt marshes, with a reputation for errant messengers travelling between villages, taking any news with them. One such story was that of a local ruler sending men into the Fens to find the source of its eeriness. There they found a being with long red hair, known as the Wuduwasa; the Wood Worm; the Witch of the Bleak Shore; a Cyclops or “the being that never dries out”. The men took the creature back to their king and built it an iron cage to investigate what gave it such presence. Their torture yielded no results. The king’s dreams started to be affected by the creature, and he gave his wife the key to the cage and told her to keep it in the croft of her hips, before he departed for the hunt. Their son is of course trapped by the creature in his cage, and bargains with him for his release. The prince is given a way to summon the creature before the latter returns to the swamp. The King returns and banishes his son in the same direction, at which point he summons the monster and leaps upon his back. They disappear under the earth and into the darkness of the Fens. Beneath the swamp was a kingdom where the boy spent seven years. Before he leaves, the creature washes his hair in a pool that turns his curls into gold that the prince is warned not to show anyone, unless he cannot avoid it. The story ends with a grand reveal, a reversal of fortune and a lesson, as most stories do.

In 1070 there was the last stand of the warrior band, lead by Hereward The Wake, to resist the Normans from invading Ely on the Fens. The Normans built a giant floating causeway and siege towers but were attacked from behind their own lines by the resistance. In the end Ely was betrayed rather than conquered by a local monk. Hereward escaped, never to be seen again. Perhaps he resides beneath the Fens still, complete with golden curls.