By Night in Chile – Roberto Bolaño 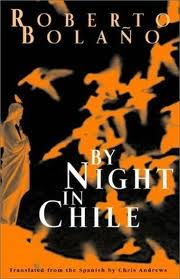 Bolaño’s novella is a vicious 130-page attack on the hypocrisy and pretension of literary society in 1970s and 1980s Chile.  The book is narrated as a deathbed self-confession by a Chilean priest and literary critic, Father Urrutia, who affirms at the start that his “silences are immaculate”, before embarking on a tale of moral compromise that spans several decades of Chile’s tumultuous recent history.  This is a period that is particularly sensitive to the author, who is said to have returned to Chile in 1973, a month before Pinochet seized power, whereupon he was arrested on suspicion of terrorism and held for eight days before being rescued by two prison guards he happened to know.  The satirical guns of By Night in Chile are, however, trained on that part of Chilean society that neglected its duty to observe, report and criticise the escalating political situation, and instead decided to indulge in what Bolaño portrays as a sort of febrile decadence that was brutally exposed after the fall of Pinochet’s dictatorship.

The novella takes the form of a single paragraph, written as a stream-of-consciousness monologue describing various episodes of Father Urrutia’s life as a man of the cloth and member of Chile’s literary establishment.  These episodes build an incremental culpability, beginning with sexual indiscretion and culminating in various forms of collusion with the Pinochet government; Urrutia is for the most part strategically placed at the fringes of the horror of what he is a witness to, allowing him to disingenuously plead that his hands are still clean as he nears his death.  This purported innocence is challenged by the shadowy figure of the ‘wizened youth’, who is accused by Urrutia of having spread “slanderous rumours … to sully my name.”  In actual fact, this mythical antagonist plays a passive role, and is used by the confessor as an imaginary interlocutor, presumably so that he can avoid having to make a real confession to a living priest.  This adds to the surrealism that runs through the novella, due in part to the format of the writing and in part to the sense of near-death delirium that Urrutia creates at the outset (although the reader wonders whether perhaps this is just more special pleading).

In shamelessly taking on Chile’s literary establishment, and several characters in the novel are clearly based on real people, Bolaño puts himself in an awkward position as a novelist.  Indeed, part of the moral outrage at the heart of the novella stems from a sense that literature can often be held in excessive esteem.  This is brilliantly conveyed in an episode of the book describing several meetings in Paris during the Nazi occupation between Ernst Jünger and the Chilean writer Salvador Reyes.  Here, Bolaño creates an overwhelming sense of literary aloofness by having the two writers perpetually discuss each other’s novels in the company of a starving painter, while Paris burns in the background.  This sort of aggressive imagery infuses the entire novella, and by using it so liberally the author manages to circumvent the obvious accusation that he is just another aloof writer, and in doing so reclaims his own sense of what it means to be a novelist, that is, someone who never turns his back on reality. 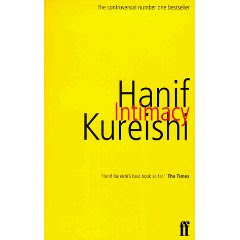 I’ve been blackballed from a book group by one of its founding members* for the last two years, and last night was my trial induction.  I also chose the book: Intimacy by Hanif Kureishi in keeping with the novella theme, and hoping to start a general discussion here on book clubs. Short, and said to be semi-autobiographical (based on the end of his relationship with Tracey Scoffield) and perhaps a cussed selection for an entirely female club. In fact, and I had been told this would happen, everyone agreed on how much they disliked it and no one has thrown me out yet.

The narrator prepares to leave his wife and two sons for his mistress Nina, if only he could find her.  This was the first thing agreed upon: better for him if he hadn’t left (quite apart from the matter of child abandonment) and been plagued with regretful indecision thereafter, as it would have been much more characteristic for an intelligent, laconic protagonist who veered too often down lazy and self-indulgent paths of memory. However, his punishment may be altogether crueller and entirely self-inflicted: to be forever trapped, looking for an escape route.

Switching between the tenses as he paces around the family home is one of the more confusing aspects to this spare but irksome novella.  He does not belong in a domestic environment with fat, efficient Susan who has the temerity to look her husband directly in the face at one point: “She looks at me hard, in order to have me notice her.” He sneers at her ability to multi-task, and if she presents too much shoulder at the wrong moment in bed he tends to stomp off to his study to frown at his Oscars.

His love for his sons seems to waver – his legs nearly give way when his friend Asif reminds him of how hard life will be for them in his absence, but he often counts off on his fingers the number of times he has cared for their basic needs, and of course he does leave in the end, because he feels he has to. In this he is admirable:  he has no interest in endearing himself to the reader when it comes to depicting his life in anything other than a brutal fashion (lies in bed all day before hacking up literature to make a poorer film version) and approach to love – he confesses to changing his outfit before meeting his mistress in an attempt to appear more youthful.  There was a collective wince at his use of Susan’s anti-ageing face cream as lube, and his bizarre envy of the hydraulic force shown by his infant son whilst urinating. This attention to detail when it came to describing his own physical plight (his belly has soft folds, etc.) is rendered even more confusing by the dearth of material on the two women he is trying to choose between. Susan is described in vague terms as blonde and fat, and Nina is a shadowy figure – although we are told which foodstuffs he wants to consume from her.

There is a deliberate lack of glamour throughout, but then he is describing the end of a loveless marriage. The question remains as to whether the absence of love will remain: Nina’s phone number when restored to him at the end does not fill you with hope. Nina has complained: “He keeps leaving me” as he whines “This confusion isn’t going to leave me alone”. I fear this will remain the case until he fully explains, finishes.

(*also a relative, so the decision was relatively well-informed)

If I die before I wake 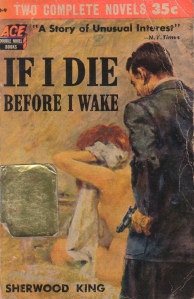 If I die before I wake – Sherwood King

I confess I am developing a liking for the slender novel, the ‘novella’. If the building unit of the novel is the paragraph, then it must be every good writer’s aim to achieve his design with a minimum of material, a minimum of paragraphs. Thrift in words, and sentences and paragraphs is one of the gifts of consciousness to mankind and a sign of its mastery – to be able to say more but to know that what is said is enough.

If I die before I wake is an excellent example. At a mere 150 pages, it propels the reader through the story of Laurence Planter with extraordinary strength. It is a novella about hope, about bullish, naive masculinity (“‘Sure,’ I said, ‘I would commit murder. If I had to, of course, or if it was worth my while.'”) in the face of inexplicable complexity, the complexity of beauty, of lust, of legal proceedings; “I don’t know. All I know is that I am down here in Tahiti soaking up the sun…”

What it teaches us, and it is not an overtly didactic novel, is that potency is at the root of brevity, self-restraint at the core of beauty. Perhaps this is the lesson of the novella as a form: sometimes, to do things better is to do things less. 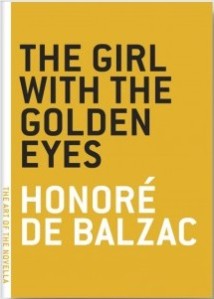 I sometimes hope that Balzac and I could have been friends.  This is based on a superficial knowledge of his love of coffee, his sleepless writing style and his international fame as a lion of French literary realism.  Suffice to say that I like coffee and I like the Girl with the Golden Eyes because they are both bitter, stimulating and enervating: “aren’t these humans always reborn just as tense as before, their faces contorted and twisted, divulging from every pore the thoughts, desires and poisons their brains are obsessed with?”

Balzac takes up the cause of the oppressed, the slight of the oppressors, with indignity at ignorance and its ubiquity.  He peals back our urbanised sense of humanity – the same humanity that accommodates poverty with riches, fortune with misfortune, that beds down death and disease with health and beauty so they jostle one with the other and we call them homogenous or acceptable, or inevitable.  He routes his narrative through the lowest common denominators: lust, slavery, sexual perversion, murder: and in doing so reveals the softness of the social underbelly in which he writes, its rawness: in essence our vulnerability.

Balzac’s surprising, salacious, seductive novella is not a fable, nor a morality tale.  It is not simply a story about a beautiful girl who is the sex slave of a duchess, a woman of status who can say: “she comes from a country where women aren’t human beings, but things with which you do what you want, things that are bought and sold.”   Balzac does not moralise openly but reveals.  The Girl with the Golden Eyes is not a sexual book because it contains sex or because it examines the sexes.  It is not violent because it contains violence.  Those things you may read in it but it is only made truly shocking by its affront to our comfortable existence which is this: it predicates its view of the world on a simple and taunting request: “Look.  First of all examine the people who have nothing.”