A life in books 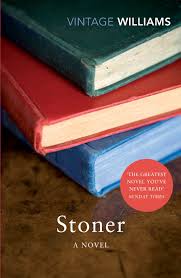 This is a book about a man, William Stoner, who enters the University of Missouri at the age of nineteen to study agriculture and never leaves. It charts his progression from undergraduate student to professor of English literature within the university, depicting the trials and tribulations of his professional and family life. Ostensibly, it is not a book that tells a particularly interesting story, certainly not an extraordinary one in any case. Nor does it go into any particular detail about the focus of Stoner’s career as a student or as a teacher of literature; I can’t remember the period or any of authors he specialises in. And yet, Williams manages to convey an irresistible sense of the joy of Stoner’s vocation, starting with a vague awareness of his calling through to the publication of his first text. In fact, the most striking thing about the novel is the way it moves seamlessly through the protagonist’s life, stopping carefully to consider some of the key moments in it, but at all times adopting a detached perspective.

It is this detached perspective that allows the author to capture the vagaries of human life so convincingly, successfully mixing a sense of fatalistic abandonment with an appreciation of Stoner’s stoicism and ability to take stands on matters of principle. He has to make several difficult decisions, including to stay at the university to study literature rather than return to his parents’ farm as originally planned: “If you think you ought to stay here and study your books, then that’s what you ought to do.” However, despite these fleeting instances of self-determination, Stoner’s control over his life is limited in the extreme, as tends to be the case with every life when looked at in retrospect. Similarly, his contact with the outside world, and with history generally, is described in terms of transient encounters: the First and Second World Wars and the Great Depression appear indirectly through other characters rather than as characters in themselves.

Perhaps it is the book’s grasp of the ephemeral that leads many to the conclusion that this is a melancholy novel about a thoroughly downtrodden individual. In many ways that assessment is correct, but it fails to do justice to the full extent of the novel’s scope. For starters, Stoner lives a life of relative comfort and is a man who loves his job. Williams spoke as follows of his protagonist: “I think he had a very good life. He had a better life than most people do, certainly. He was doing what he wanted to do, he had some feeling for what he was doing, he had some sense of the importance of the job he was doing.” There is no doubt that, despite some moments of intense conflict and sadness, Stoner’s is a full life, which is more than most will experience. Williams manages to convey this in a thoroughly original manner, and it is a book that haunts the reader long after it has been put down.